An article published in the journal “Science” reports the discovery of massive gas filaments between the galaxies of a protocluster cataloged as SSA22 about 12 billion light years from Earth. A team of researchers coordinated by the RIKEN Cluster for Pioneering Research used the MUSE spectrograph mounted on the VLT in Chile and the Suprime-Cam on the Subaru telescope to map those filaments, which extend over more than 3 million light years. Follow-up observations that provided further details were conducted with the ALMA radio telescope and the Keck telescope. The filament gas can feed star formation and the growth of supermassive black holes in the protocluster. The observation of those processes can provide new information on the evolution of galaxies.

The galaxy protocluster SSA22, also known as EQ J221734.0+001701, was discovered in 2005. In 2006 the discovery of the first traces of a filament network was announced. The structures in that cluster include huge gas bubbles that are as long as 400,000 light years. The presence of all these objects and their density immediately raised the interest of astronomers but the distance of about 12 billion light years and their great faintness make their study difficult.

The evolution of galaxy clusters is studied using increasingly sophisticated simulations as well, for example Cluster-EAGLE (C-EAGLE). The bottom image (Courtesy Joshua Borrow / C-EAGLE) shows a screenshot from that simulation with a galaxy cluster comparable to SSA22 at the convergence of filaments similar to the ones mapped.

A confirmation of the results of simulations such as C-EAGLE came thanks to the combination of observations of the SSA22 protocluster with the Multi Unit Spectroscopic Explorer (MUSE) instrument mounted on ESO’s Very Large Telescope (VLT), the Suprime-Cam on the Subaru telescope, the ALMA radio telescope and the Keck observatory. The MUSE instrument detected the Lyman-alpha radiation, the ultraviolet light produced by the hydrogen that gets ionized and then returns to its ground state. According to the calculations, the high level of radiation detected is probably caused by starburst galaxies, which have a high star formation rate, but also by black holes in formation.

Hideki Umehata, lead author of the article, explained that previous observations had shown emissions from gas bubbles that extend beyond the galaxies but now he and his colleagues could clearly show that there are extremely long filaments that extend even beyond the edge of the view field. This is further evidence that those filaments are indeed fueling the intense activity observed in the galaxies within the filaments.

Michele Fumagalli of the British Durham University, another of the authors of the research, stated that it’s very exciting to see clearly for the first time multiple and extended filaments in the early universe. We have a way to map those structures directly and to understand in detail their role in regulating the formation of supermassive black holes and galaxies.

Put simply, the results of this research suggest that the gas has considerable importance in the evolution of galaxies due to the effects of gravity that determine first of all the creation of filaments. The consequence is that the filament network determines the great structures that exist in the universe.

The study of filaments is also important in relation to research on dark matter because according to the models that currently have the highest consideration in the filaments there’s both ordinary matter and dark matter. This will also allow to test alternative models that don’t include the existence of dark matter. 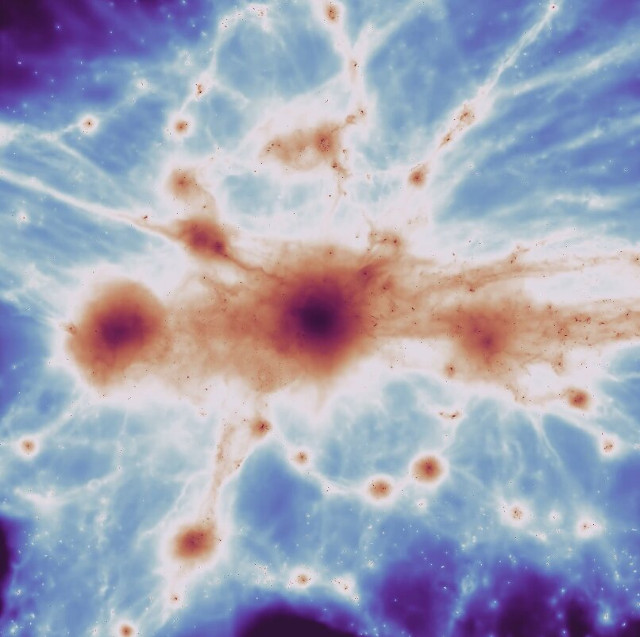