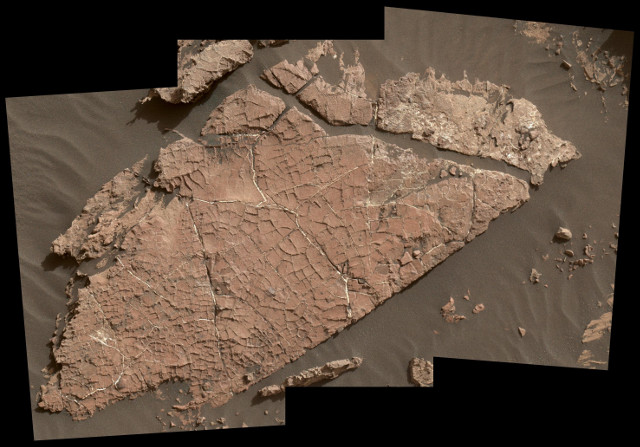 An article published in the journal “Nature Geoscience” reports the results of an analysis of data collected by the Mars Rover Curiosity in a section of sedimentary rocks of Gale Crater on Mars called Sutton Island where salt was detected in the form of mineral salt in the sediments. A team of researchers led by William Rapin of Caltech interpreted that presence as evidence that about 3.5 billion years ago there were salty ponds that went through episodes of overflow and drying. The deposits show the history of climatic fluctuations in the period in which the Martian environment passed from wet and similar to the Earth to today’s dry desert.

The Mars Rover Curiosity visited the section of sedimentary rocks about 150 meters long in Gale Crater called Sutton Island in 2017. In ancient times, in Gale Crater there was a lake and now there’s Mount Sharp. The Curiosity mission is slowly reconstructing the history of that environment dating back over 3 billion years and its changes.

In Sutton Island, the Mars Rover Curiosity found rocks full of cracks like the one called “Old Soaker” in the image (NASA/JPL-Caltech/MSSS), a consequence of drying a mud layer that occurred over three billion years ago. Three images captured by the MAHLI (Mars Hand Lens Imager) camera have been combined for this view that spans about 90 centimeters from left to right. Some edges of the polygons formed by the cracks have the same color as the rock around. This can happen when wind-driven sediments accumulate in open cracks, they become rock under the pressure of more recent layers that accumulate above it and then get eroded by the wind. The materials that fill the cracks resist better than those that were originally mud, with the result that the cracks become ridges.

Typically, if a lake dries up, it leaves stacks of pure salt crystals. Sutton Island’s salts are different, meaning that they are in the form of mineral salt – also known as rock salt or halite – and not in the form most frequently obtained from sea water. The fact that this Martian salt is mixed with sediments suggests that it crystallized in a wet environment, perhaps just below the ponds that were evaporating.

The layers of sediments of the type found in Sutton Island slowly deposited on the bottom of a lake and have flat layers. Higher energy environments thanks to winds and water flows can instead create layers that gradually incline, such as an outcrop called “Teal Ridge” studied by the Mars Rover Curiosity during the past summer.

Many major climate changes of that remote era are due to the fact that the Martian atmosphere got slowly eroded by the solar wind after the cooling of the planet’s core left it without a magnetic field to protect it. However, the changes in Mars’ axis of rotation had some influence as well. New traces could be found by the Mars Rover Curiosity in an area of ​​Mount Sharp in which the presence of sulfate salts was detected from the orbit. Their study could provide more important answers about the ancient history of Mars.

Previous Post: Gas filaments discovered that connect the galaxies of a very ancient protocluster
Next Post: High pressure at the borders of interstellar space