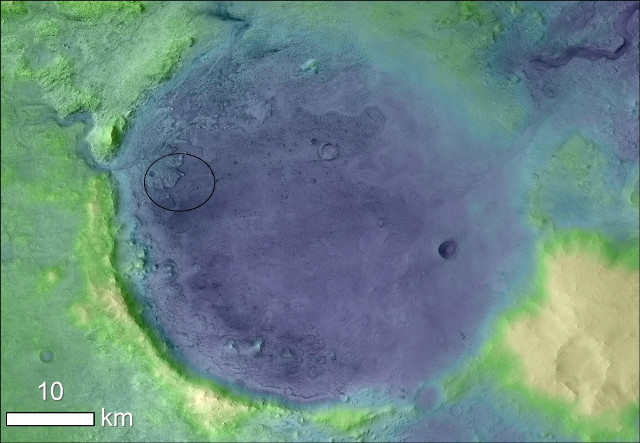 Two articles – available here and here – published in the journal “Icarus” report as many studies on Jezero Crater on Mars. Two teams of researchers used data collected by ESA’s Mars Express space probe to reconstruct various parts of the history of Jezero Crater which, with its approximately 49 kilometers in diameter, in the past used to host a lake. It dried out long ago, but left traces such as clay materials that only form in the presence of water. The diversity of minerals is also due to an ancient volcanic activity that affected the entire region. NASA’s Mars 2020 mission, with the Mars Rover Perseverance, will land in Jezero Crater, if all goes well, in February 2021 to also look for possible traces of life, present or past.

Jezero crater is part of the Syrtis Major quadrangle, on the edge of the huge Isidis Planitia basin and near regions studied for signs of various activities such as Nili Fossae. The interest in these areas led to indicate them as possible landing sites for various space missions, and in 2018 NASA decided that the Mars Rover Perseverance will land in Jezero Crater. The image (NASA/JPL-Caltech/MSSS/JHU-APL/ESA) shows an elevation map of Jezero Crater. Lighter colors represent higher elevation. The oval indicates the area where the Mars Rover Perseverance is scheduled to land.

The two studies published in “Icarus” will help geological but also astrobiological research with the search for traces of life forms. When Mars was young, it was much more like Earth and conditions in a place like the lake that filled Jezero Crater were favorable to the development of life forms.

Lucia Mandon of the Laboratoire de Géologie of Lyon, France, lead author of one of the two articles, explained that scientists have known for decades that Nili Fossae is a rather unique part of Mars and Jezero Crater was chosen as the landing site of the Mars Rover Perseverance thanks to its uniqueness. However, scientists are still unsure how it formed and why there’s a great amount of materials rich in olivine and carbonates.

Data collected by ESA’s Mars Express space probes and NASA’s Mars Reconnaissance Orbiter (MRO) made it possible to establish that the region’s bedrock around Jezero Crater rich in olivines extends for at least 18,000 square kilometers and formed about 3.8 billions of years ago. This region was thought to have formed as a result of the impact that created Isidis Planitia, but data indicate that that process took place tens of millions of years later. That suggests that the colossal eruptions that occurred at the time ejected the materials that formed the olivine deposits.

The researchers also mapped the carbonates present in Nili Fossae, and some of the most important surveys arrived near the Mars Rover Perseverance landing site. These minerals are formed in rather neutral waters, a type of environment favorable to most known life forms on Earth.

Briony Horgan of Purdue University, lead author of the second article published in “Icarus”, explained that the carbonates that form on lakeshores on Earth are fantastic for keeping biosignatures. The alkaline lakes that produce carbonates on Earth are almost always inhabited by stromatolites, mineral blocks generated by layers of microbial mats that can date back even to billions of years ago. We don’t know if any life form ever existed on Mars, but an environment like the one in the Jezero Crater’s lake is a great place to look for biosignatures and organic molecules dating back to the time when Mars was young.

In the Nili Fossae area, previous studies already revealed the presence of a hydrated silica deposit where once there was the delta of a river that flowed into Jezero Crater’s lake. This type of mineral is also excellent in preserving traces of life forms.

These new studies confirm all the interesting characteristics of Jezero crater fully justifying its choice by NASA. Even in favorable conditions, the investigations remain difficult because the rover will have to cover a huge area, but we can still expect interesting discoveries regardless of the presence of traces of life forms.

Previous Post: A confirmation of the theory of general relativity from the most powerful gamma-ray burst ever detected
Next Post: Two unusual brown dwarfs