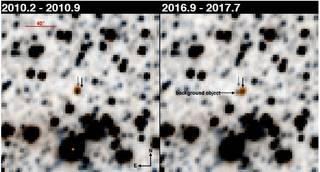 An article published in “The Astrophysical Journal” reports the discovery of two brown dwarfs thanks to the help of citizen scientists who participated in the Backyard Worlds: Planet 9 program. Cataloged as WISEA J041451.67-585456.7 and WISEA J181006.18-101000.5, those are two objects with masses that fall within the range typical of brown dwarfs but with other characteristics more similar to those of gas giant planets. They could be the first extreme T-type subdwarfs, and resemble ancient exoplanets, with very little iron, having an estimated age of around 10 billion years. Their characteristics make them useful to better understand exoplanets.

Brown dwarfs are objects halfway between planets and stars, with masses between 13 and 75 times Jupiter’s. Our knowledge of brown dwarfs is still limited because their weak emissions make them detectable only in the cosmic neighborhood. That’s why they were discovered only in the 1990s.

NASA funded the Backyard Worlds: Planet 9 program, which allows anyone to examine images captured during the Near-Earth Object Wide-Field Infrared Survey Explorer (NEOWISE) mission between 2009 and 2011 in search of unknown objects. Someone might discover a new planet in the solar system, but in this case, two far more distant objects were reported which turned out to be two very particular brown dwarfs.

Actually, WISEA J181006.18-101000.5 had already been noticed by Adam Schneider of Arizona State University in 2016, but it was in a crowded area of ​​the sky and this made it difficult to confirm its existence. The work of some citizen-scientists made it possible to obtain more data on it and also to identify another brown dwarf with similar characteristics. The image (courtesy Schneider et al. 2020) shows WISEA J181006.18-101000.5 in two different positions.

The existence of WISEA J041451.67-585456.7 and WISEA J181006.18-101000.5 was confirmed thanks to follow-up near-infrared spectroscopic observations. However, spectral analyzes gave surprising results because at some infrared wavelengths they look like normal brown dwarfs but at other wavelengths they don’t resemble any star or planet observed so far.

Another surprise came from the discovery that these two brown dwarfs contain very little iron. The estimated age of about 10 billion years explains this anomaly because heavy elements are more abundant in objects that formed in an environment where elements produced by various generations of stars are present.

Marc Kuchner, the principal investigator of the Backyard Worlds: Planet 9 project, commented that astronomers should search more accurately for ancient exoplanets that contain small amounts of metals or orbit ancient stars. This would help to study the influence of the presence of heavy elements on their formation.

The discovery of the possible extreme T-type subdwarfs WISEA J041451.67-585456.7 and WISEA J181006.18-101000.5 is interesting also because their composition influences their characteristics, making them closer to planets than to stars. Discovering substellar objects like these two isn’t easy but it could be important to better understand certain planetary and stellar formation and evolution processes.

Previous Post: Jezero crater on Mars is a very interesting area for the Mars Rover Perseverance mission
Next Post: The most distant optical afterglow from a short gamma-ray burst detected