An article accepted for publication in the “Astrophysical Journal Letters” reports a study on the massive protostar Cep A HW2 and in particular on the jets of materials ejected from it. A team of researchers used the VLA to capture the best images so far of a protostar that, at the end of its formation, will likely be about 10 times more massive than the Sun. The details of the ejected jets indicate that they have an origin close to the star that has a wide angle and then tapers as the distance increases, a process called collimation. In lower-mass protostars, the collimation of the jets occurs much closer to their surface. Understanding the reason for this difference will help to better understand star formation processes.

In the course of a star’s formation, the accretion phase includes various processes that are not yet well understood. For example, jets of materials are ejected from the poles of a protostar and astronomers are trying to understand the processes behind their formation. Probably the magnetic field of the protostar has to do with it, but there’s not enough data to obtain evidence of what’s happening. These jets are useful to reduce the protostar’s angular momentum and preventing its rotation from reaching such speeds as to eject its outer layers.

Cep A HW2 is a protostar about 2,300 light-years away from Earth, a relatively short distance also thinking about other massive protostars, much further away and therefore much more difficult to study in detail. The VLA (Very Large Array, formally Very Large Array) with the 27 radio telescopes that compose it, made it possible to obtain the best details about a protostar with a mass much higher than the Sun’s. These are very useful observations because they provided the first view of the portion of a jet emitted by Cep A HW2 closest to its surface. It’s a portion that has a length comparable to the diameter of the solar system but it took an instrument of considerable power to be able to observe it.

The results were very interesting and also surprising. The observed jet has a wide-angle origin, and collimation occurs at a considerable distance, comparable to that of Uranus or Neptune from the Sun. In less massive protostars, collimation occurs much closer to the surface, a difference that requires explanations that could be very helpful in understanding those processes.

The bottom image (Bill Saxton, NRAO/AUI/NSF) shows an artist’s concept of the protostar Cep A HW2 surrounded by an accretion disk and a jet that starts at a wide angle and then collimates into a much narrower jet.

Being able to obtain high-quality observations of other massive protostars and in particular of their jets would help to understand what mechanism is in place in that case. An answer would help to better understand star formation processes, in this case regarding the possible influence of the protostar mass on such processes. 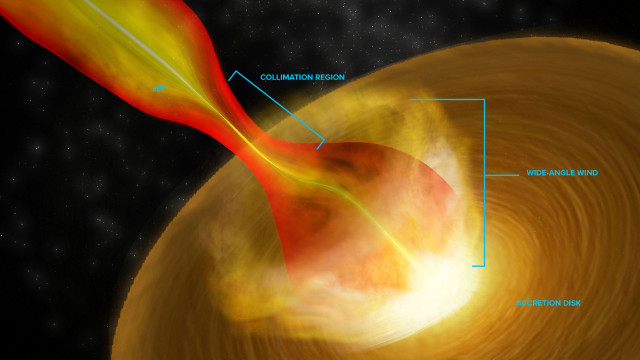