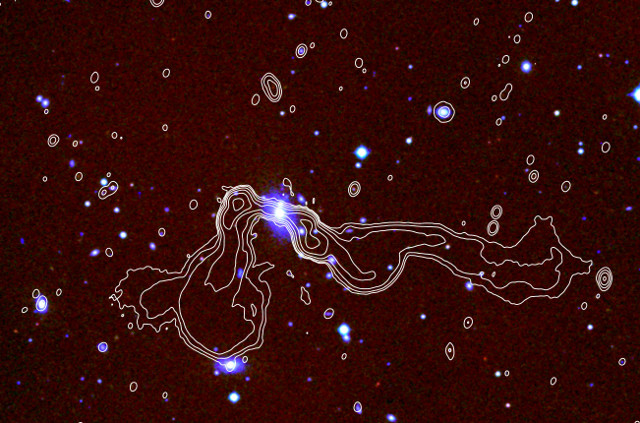 An article published in the journal “Monthly Notices of the Royal Astronomical Society” reports a review of radio galaxies discovered 47 years ago using two of the most powerful radio telescopes currently in service. A team of researchers used the uGMRT and MeerKAT radio telescopes to conduct the new observations. The first author is astronomer Bernie Fanaroff, who began the study of radio galaxies and classified them together with astrophysicist Julia Riley.

Radio galaxies are sources of powerful radio emissions thanks to their active galactic nuclei, powered by supermassive black holes that heat the materials around them to such an extent that they generate powerful electromagnetic emissions. In 1974, Bernie Fanaroff and Julia Riley established a classification of radio galaxies based on their morphology, a milestone in the field of radio astronomy.

Compared to the radio telescopes of 50 years ago, the current ones are capable of detecting much fainter emissions and much more detail. uGMRT (Upgraded Giant Metrewave Radio Telescope) in India and MeerKAT in South Africa are two of the most powerful radio telescopes available today and made it possible to obtain new observations of four radio galaxies studied in the 1970s, classified as 4C 12.02, 4C 12.03, CGCG 044-046 and CGCG 021-063.

The new observations made it possible to capture many new details of the four radio galaxies. The image (T. Venturi/O. Smirnov/MNRAS 2021) shows the radio galaxy CGCG 044-046 in an elaboration showing the MeerKAT detections in white with an optical image of the Digital Sky Survey 2 at infrareds, red, and blue in the background. CGCG 044-046 is surrounded by other galaxies and the new observations show, among other things, the influence on its shape of its neighbors and the intergalactic hot gas. This means that the new results offer useful information even for studies larger than the single galaxy.

One of the purposes of this study is to understand if, after so many years, it’s appropriate to change the classification of radio galaxies. This is only the beginning, as it only covered four radio galaxies but the first conclusion is that the existing classification is still fine. If anything, there could be problems in recognizing the morphology of radio galaxies observed with instruments that are not adequate. The review of known radio galaxies will continue and unexpected new details could provide new information useful for various astronomical studies.

Previous Post: A jet with surprising characteristics emitted by the massive protostar Cep A HW2
Next Post: The PHANGS-ALMA survey presented the mapping of 100,000 stellar nurseries in the nearby universe