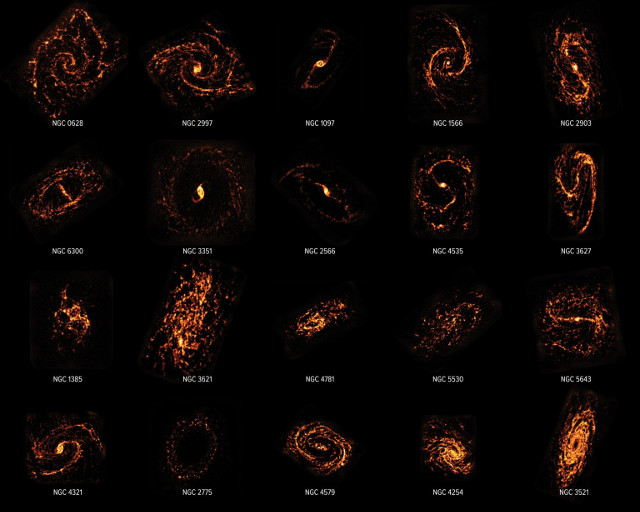 An article accepted for publication in the “Astrophysical Journal Supplement” series presents the PHANGS-ALMA survey with the mapping of about 100,000 stellar nurseries in 90 galaxies in the nearby universe. A team of researchers used the ALMA radio telescope to map molecular clouds of gas and dust in which conditions are suitable for the formation of new stars. The results of this survey were presented at the 238th meeting of the American Astronomical Society held in recent days.

More and more sophisticated astronomical instruments led to great advances. Among the many objects of investigation is star formation, which occurs in clouds of gas and dust in which there are the right conditions. Despite this, there are still many things we don’t know about the birth of the stars.

Between 2013 and 2019, the PHANGS (Physics at High Angular Resolution in Nearby GalaxieS) project conducted the first systematic survey of 100,000 star nurseries in 90 galaxies in the nearby universe using the power and sensitivity of the ALMA (Atacama Large Millimeter/submillimeter Array) radio telescope, inaugurated in March 2013. The image (ALMA (ESO/NAOJ/NRAO)/PHANGS, S. Dagnello (NRAO)) shows some of the galaxies observed in this project. In particular, ALMA detects emissions at millimeter wavelengths from carbon monoxide molecules present in molecular clouds.

The results of the survey immediately showed they were very interesting. Professor Adam Leroy, lead author of the paper, explained that astronomers thought all star nurseries in all galaxies must look alike but this survey revealed that this isn’t the case. He added that it’s the first time that millimeter-wave images were captured of many nearby galaxies that have the same sharpness and quality as optical images.

Astronomer Eva Schinnerer of the Max Planck Institute for Astronomy (MPIA), principal investigator of the PHANGS collaboration, used the metaphor of the city to explain what happens in galaxies: a star is like a person whose birth has its place universe. A person is connected to his/her home, neighborhood, city, and region. Similarly, a star must be connected to its molecular cloud, galactic, and galaxy, which can be part of a group. The observations conducted during the PHANGS project showed that the “neighborhood” in which a star is born has small but pronounced effects on the location and number of stars that are born.

Previous studies, including those conducted using the ALMA radio telescope, focused on a single galaxy or even a specific part of a galaxy such as a single molecular cloud. These are important studies but the PHANGS project made it possible to map a huge amount of star nurseries. This allows assessing the diversity in the conditions existing in those molecular clouds and their changes over time.

The PHANGS-ALMA survey is a part of a larger project that includes parallel surveys conducted with other instruments in other bands of the electromagnetic spectrum. Multiband astronomy is becoming more and more important and the PHANGS project has this kind of approach. For this reason, there are surveys such as PHANGS-MUSE, which uses the MUSE instrument mounted on ESO’s Very Large Telescope (VLT), and PHANGS-HST, which uses the Hubble Space Telescope.

The discovery of the diversity in stellar nurseries represents only the beginning of new studies because the consequences of the various differences on the formation of stars and their planets remain to be understood. The PHANGS project is of the type whose results will be used for many years in future research.